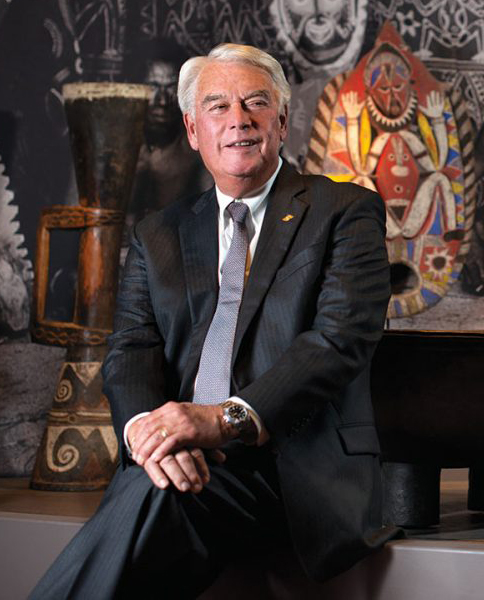 Keller died Tuesday night, according to Kelly Bishop, a spokeswoman for the Santa Ana-based museum.

Family, friends and colleagues are mourning the unexpected loss of the Bowers CEO and president, who they credit for growing the museum over the decades with a diverse array of exhibits and programs.

“His vision was to open the museum up and connect it to the world,” said Julie Perlin Lee, the director of the Laguna Art Museum who worked with Keller for 12 years at Bowers and called him her mentor.

His last day on the job was spent “putting in a full day of work in preparation for the opening of an exceptional exhibition that he was very proud of, ‘Guo Pei: Art of Couture,’ followed by dinner with his wife,” according to a statement from the museum.

“With his leadership and experience, we have brought amazing exhibits from all around the world to Orange County,” said Anne Shih, the museum’s chair and board of governors.

“This is a huge loss,” Perlin Lee said.

Under his leadership, Bowers underwent two major building expansions. Keller “lifted the museum to a world-class internationally celebrated institution, focused on presenting fine art and culture from around the world,” said a statement from the institution.

Keller was born in Allentown, Pennsylvania, and graduated with a bachelor’s degree in geology from George Washington University. He earned master’s and doctorate degrees in geology from the University of Texas-Austin.

Keller started work at Bowers in 1991. Before that, he was director of education at the Gemological Institute of America and worked for nearly a decade at the Natural History Museum of Los Angeles County.

Keller will be privately buried in his hometown and plans are in the works for a celebration of his life. Instead of flowers, donations were asked for the museum at www.bowers.org/donate.

We are shocked and saddened by the news of Dr. Peter Keller’s passing. We had just reached out to Pete not more than 2 months ago regarding yet another large over-valued red corundum. We had Pete re-tell the story of a gentleman who showed up at the LA County Museum of Natural History with a 5 pound “ruby” appraised for $3 million. Pete reached into his bottom desk drawer and pulled out another 5 pound “ruby” that he used as a door stop.

Pete will be sorely missed by the Bowers, the San Diego community, and the gem and mineral world. – gr

Gary Roskin - October 26, 2022 0
By Mining Review AfricaOct 24, 2022 On 20 October 2022, Gemfields updated the market regarding the Cabo Delgado insurgency and Gemfields’ decision at the time...

Cartier’s Jacqueline Karachi talks to Vogue about 100 years of Indian history within...