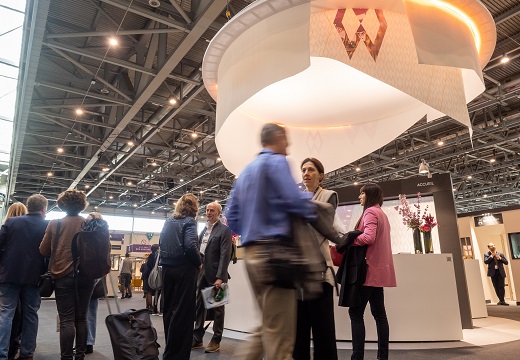 The second edition of the Swiss show this year enjoyed a jump in traffic, which bodes well for the top-tier gemstone and jewelry market.

More than 5,000 people attended the Swiss gem and jewelry fair’s fifth edition from November 3 to 6, according to preliminary figures from organizers — over 7% more than the previous event, which took place in May. There were also 176 exhibitors, slightly below May’s numbers.

“The market is very good,” GemGenève cofounder Thomas Faerber told reporters on the eve of the show, citing his own experiences this year with his company, the Faerber Collection, which specializes in exceptional gems and antique jewelry. “We have had a very good year so far. I am confident that this edition of GemGenève will be a successful one.”

The overall mood was optimistic at the event, which took place at Palexpo, near the Geneva airport. Exhibitors’ stands were busy from the outset, with vibrant networking going on throughout the fair. Impressive results at recent high-value jewelry auctions in Geneva helped boost spirits, as did the buoyant demand from the May show.

Back in the game

GemGenève emerged in 2018 just as premier Swiss watch and jewelry show Baselworld was falling into decline amid widespread criticism of its management. The early editions of GemGenève got off to a strong start, absorbing the diamond and gem suppliers that had previously attended the Basel fair.

After a lockdown-induced break, GemGenève has gathered momentum again and become a leading staple of the trade fair calendar for the market’s high end. It’s generally scheduled close to the Christie’s and Sotheby’s Magnificent Jewels auctions in Geneva, which bring the world’s leading jewelry and gem collectors to the city to deal in big-ticket items.

Tap here for the full report

A Personal Flight: Peridot from Space

Gary Roskin - November 2, 2022 0
by Rick StinsonThe “New” 4 Billion-Year-Old Gem Peridot From A Pallasite Meteorite    Pallasite meteorites have been known since the German naturalist Peter Pallas (1741–1811), who studied in...

Marvel’s Reality Stones are real, spectacular rubies — and they’re on...

For Love of Lapis Lazuli