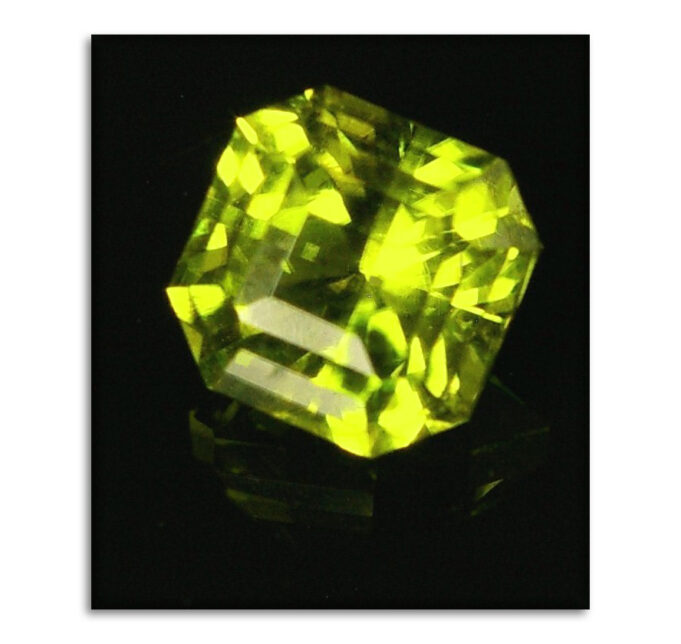 Peridot From A Pallasite Meteorite

Pallasite meteorites have been known since the German naturalist Peter Pallas (1741–1811), who studied in 1772 a specimen found earlier near Krasnoyarsk in the mountains of Siberia that had a mass of 680 kilograms (1,500 lb).[a] The Krasnoyarsk mass described by Pallas in 1776 was one of the examples used by E.F.F. Chladni in the 1790s to demonstrate the reality of meteorite falls on the Earth, which most scientists at his time considered as fairytales¹.   What I’ve learned is from research, what the physicists tell us, tribal knowledge of collectors, hunters and my personal experience of recovering and cutting the peridot crystals that are surrounded by a solid iron/nickel matrix .  Having a brittle tenacity, it is mind blowing to find anything worth cutting, considering the incredible impact of molten metal when the pallasite was formed, (somewhere around 4 Billion years ago), the fireball and explosion on entering Earth’s atmosphere  and the final shock of impacting Earth.  That is why most pallasitic peridot is quite fractured and when crystals are freed from their iron prison they disintegrate into small pieces.  The few crystals that survive that are large and clean enough to cut into gems, are very scarce.   I get goosebumps every time I process a pallasite, not knowing what, if anything will be inside.  It is a treasure from heaven and I am in awe, every time I hold a crystal up to the light for the first time since it was formed, so very long ago.

Pallasites are considered by many collectors and connoisseurs to be the most beautiful of all meteorites. The meteorite hunters generally have them thin sliced to show the peridot crystals with back lighting.  Due to rarity and high prices, some hunters have however, taken the chance and recovered some stones.  They are often sent overseas to be cut.  The result can be “native cutting” that is, low quality, badly fractured gems with poor “fish-eyed” optics.  As with so many new species, there can be misleading information, lack of gem knowledge and flakey guarantees.  Compare guarantees, experience, quality and provenance.

One must also note that pallasitic peridot is a GIA Type III gem.  This means that gems are expected to be fractured to various degrees, there  may be inclusions in the crystal and thus ET peridot is not graded for clarity.  I can assure you that in a few cases, the flaws are minor and there are also a few stones that are very clean and can be identified by chemical analysis.   My goal has always been to produce the best gem possible, even if it means sacrificing some material.  So, I test every piece and cobb the crystal to try and remove any serious fractures.  If it survives my attempts, then I know it’s going to be strong enough to cut and hopefully with lots of TLC will last another billion years!  Only time will solve that mystery.   In some cases, I just can’t bring the forces to bear that would likely destroy a great rarity, so I identify the resulting gem as a suggested specimen, not to be worn.

The old, World Record pallasite found near “Brenham, Kansas, has been known since the early settlers and I believe there is a petroglyph somewhere in the county, with a meteor graphic symbol inscribed in a rock face, likely made by an early buffalo hunter culture.  I haven’t seen it, but that’s the story.  I have seen the impact crater that is still visible and is probably 50 feet in diameter. All the land in the strewn field is private, as usual, so ask permission before entering someone’s property.

The old World’s Record pallasite with the Big Well in background.

The meteorite hunter that found the new record, was also quietly beginning to find pallasites at yet another Kansas, strewn field.  Intrigued with the possibility of finding cuttable peridot  from this new strewn field, he was in town looking for a cutter.  That’s where my personal flight began.   We eventually met and the question was asked if I’d be interested in cutting peridot — if I could recover anything.  I had never given this much thought, as I had purchased some small pieces of Brenham, and knew that Brenham peridot has crystals that are terribly fractured, like most other pallasites.

Surprisingly, a few meteoric crystals from the new strewn field looked fairly solid, so I decided to give it a go and thought it might be an interesting challenge. However the runway was only greased and I had a long way to go before take off.   I began by trying to figure out how I was going to get some of these heavenly crystals free from their 4+ Billion-year-old nickel-iron prison!  I started researching everything I could think of to tackle the problem. About six months later, I began to recover a few pieces that were definitely large enough to consider for cutting. Just in case you’re thinking “just dump it in acid and let it eat the iron!”  Don’t even go there!  Master cutter John Sinkankas ²  noted on peridot that: “Strong acid will dissolve or damage the peridot!”   And you’re likely to wind up with a bucket full of rusty, acidic, smelly, acid waste that’s full of goo instead of peridot.  I was developing a process for recovering the peridot and I eventually found some very clean crystals and cut my first ET gems.  Note, that GIA Labs reports that ET gems that weigh greater than ½ carat are considered large. ³  Anything extremely clean over one carat is unheard of.

Black Peridot Can Be Beautiful.

While involved in this process, I found one crystal that was black, and it made me very curious.  But it wasn’t a metallic shiny black like a spinel crystal, that I’ve also found in some pallasites.  I was drawn to it and spent a few minutes looking at it, every time it popped up – kinda like a bad penny.  My paradigm was that I knew it was not what I was looking for, or worth spending time on, but still there was something about it that tweaked my curiosity.  I was searching for facet grade crystals, so my goal of trying to find and cut something worthwhile, kept me focused in that direction.  After a couple of months, the black piece popped up again from wherever.  I finally decided to just take it to the grinders and see if it was just another piece of fusion crust that was fried when the meteor entered our atmosphere.  I very slowly started cutting and after a few seconds, I noticed that the black was only a rind!  Inside was an obvious peridot crystal that was not fractured and looked clean. I finished sanding and polishing and wound up with not only a nice cabochon, but also noticed something even more special.  The stone was chatoyant;  that is a physical light phenomenon that produces a point of light, or sometimes a cat’s-eye or star effect.  In Et peridot, chatoyancy it is caused by an inclusion of microscopic needles that line up parallel to each other.  When the stone is properly oriented, and light reflects off them, it creates a line of light called a “cat’s-eye”.

Most ET peridot has some of the acicular needles.  To me, that’s a good thing as it immediately identifies the stone is meteoric in origin.  Earthly peridot does not have these needles.   They also influence the color as well, causing a golden reflections in faceted gems.

As I work the final stages to get the crystals removed, from what I’ve personally seen, I always marvel just how any crystals survived.  Some have micro ribbons of iron running through the fractures!  The thoughts of the initial giant impact in space, leaves me in awe.   I am so grateful and feel blessed to be able to cut one of these gems and to see it reflect the sun’s light for the first time.  It’s a treasure from heaven, to contemplate the creation of our solar system, our Earth, and to share the thrill of just holding the oldest gem, is an unequaled experience.

Cutting extraterrestrial peridot is not much different than many other gems.  Each species has its own characteristics that must be respected in cutting and when worn in jewelry.  The stages of sawing, preforming and cutting are normal but polishing peridot can be troublesome. ET peridot is somewhat brittle and scratch marks or pits can be a bit of a problem to work, when reaching the polishing stage.  I prepolish all facets with 1200 diamond. Keep the lap wet.  If the stone develops pits, change to the opposite lapping direction.  The standard polishing technique is to polish on tin with a paste of Linde A, to which a couple of drops of muriatic acid has been mixed.  I have had excellent results using a Batt lap, rather than the traditional tin and Linde technique.  I generally go from 1200 mesh prepolish to 3000 mesh diamond and follow that with 14,000 mesh on a low speed with excellent results.  Crown angles 40°, pavilion angles 40°.  For cabochons I use expandable drums with the same diamond mesh sequence and small amount of water.

Rick Stinson is the owner of Stinson’s Gemcutting. He does have extraterestrial peridot for sale in rough and cut.

Nigerian Govt to Ban Artisanal Miners from Sale of Rough