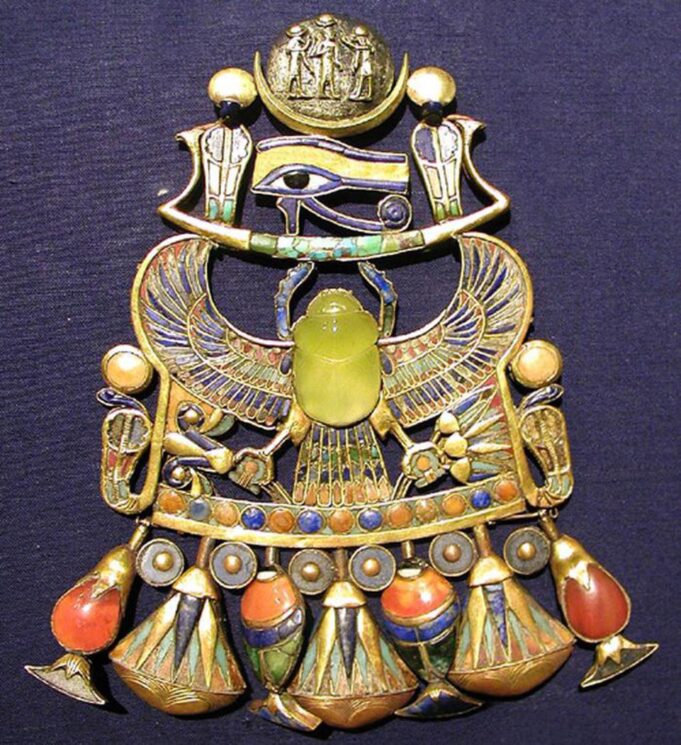 On November 4, 1922, a boy accidentally stumbled on a stone that turned out to be the top of a flight of steps cut into the bedrock of the Valley of the Kings. The Valley of the Kings is a remote valley located in the desert west of the river Nile. In Pharaonic Egypt, this valley was considered the land of the dead and many pharaohs were buried here. In 1922, British archaeologist Howard Carter was searching here for the tomb of Tutankhamen, a relatively minor pharaoh who ruled over Egypt from 1332 to 1323 BCE.

One month later, Carter entered the pharaoh’s tomb. Asked if he could see anything in the burial chamber, Carter allegedly responded: ”Yes, wonderful things.”

Tutankhamen’s tomb was filled with statues made of ivory and precious metals, jewelery and even a complete golden chariot. In one treasure chest, Carter discovered a large breastplate, decorated with gold, silver, various precious jewels and a strange gemstone. The breastplate shows the god Ra as a winged scarab, made from the yellow, translucent gemstone, carrying the celestial bark with the Sun and the Moon into the sky.

Carter identified the gemstone at first as chalcedony, a common variety of the mineral quartz. Ten years later the British geographer Patrick Clayton was exploring the Libyan Desert along the border of modern Egypt and Libya. Here he discovered some strange pieces of glass in the sand. The pale yellow in color and translucent material seemed to be identical to the gemstone found in Tutankhamen’s tomb. Two years later he published a short note, suggesting that the pieces of Libyan Desert Glass (LDG) were the quartz-rich deposits of a dry lake. In 1998, Italian mineralogist Vincenzo de Michele analyzed the optical properties of the gemstone in King Tut’s breastplate and confirmed that it was indeed a piece of LDG.

LDG is composed of almost pure silicon-dioxide, but it contains unusual traces of iron, nickel, chromium, cobalt and iridium. It is among the rarest minerals on Earth, as it is found only in the Great Sand Sea north of the Gilf Kebir Plateau, one of the most remote and desolate areas in the Libyan Desert.

Meteorites found in the desert, along with tektites, are not new. Gem Focus September 2021:
Meteoritic Gems; extraterrestrial beauties fallen to Earth.

Ancient Egyptians called iron “metal of heaven” which had a strong
connection to royalty and power, according to the Smithsonian
Magazine article published in 2013. A group of iron beads excavated
in Egypt were puzzling as they were used more than 2,500 years
before human beings started smelting iron from ore. Further
advanced analyses of the beads revealed a specific chemistry and pattern that
matched with meteorites. No wonder it was called metal from heaven!

Modern gemology welcomes any type of origin for gem materials. It is pertinent to
understand the fundamental difference between tektites and meteorites when it
comes to extraterrestrial gems. Meteorites are interplanetary rocks that ended up
on the Earth’s surface. They are originally asteroids in outer space and once they
get caught by Earth’s gravity, they move like a fireball in the atmosphere towards
the surface; think about fallen stars on a clear night. If they survive the friction and
heat before completely burning up, they become meteorites; delightful collector’s
material as well as a valuable information source for scientists. On the other hand,
an extremely large asteroid may create a powerful enough impact to melt the
surrounding on the Earth. The solidification of this molten material is so fast that it
will create a glassy structure known as tektites, i.e., moldavite and Libyan glass.
Therefore, tektites are entirely different materials then meteorites.

How to Clean and Care for Your Jewelry

An Unusual Pearl: Coated or not?