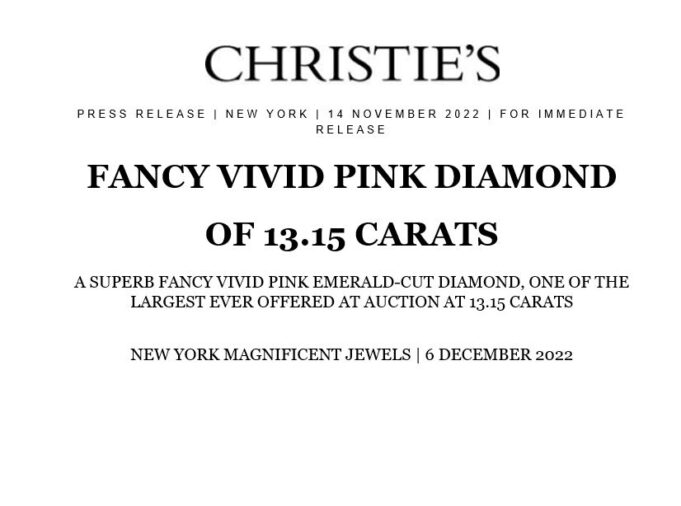 Up for auction, a magnificent square emerald cut, Fancy Vivid Pink, (clarity: VVS1, potentially internally flawless) weighing in at 13.15 carats. Estimated at between $25 million and $35 million USD, this will no doubt be one of the highlights of the evening.

According to Christie’s, in the fancy vivid pink range, a diamond of more than six carats is rarely encountered.

Rahul Kadakia, International Head of Christie’s Jewellery, has just returned to New York from a very successful auction overseas. “Following the success of The Fortune Pink, which achieved almost $30 million last week in Geneva, we are proud to have been approached by a private collector to offer this incredible diamond at auction in December.” The Fancy Vivid Pink “Fortune Pink” weighs 18.18 cts.

“This season has seen outstanding results for fancy-colored diamonds and this particular fancy vivid pink is of the highest caliber. With impressive saturation, step-cut facets and a clarity grade of potentially Internally Flawless, this 13.15 carat fancy vivid pink is magnificently rare.”

Tap here for more information regarding the sale at Christie’s, New York.

Jedi Spinels: a quest to the origin of the ultimate red...