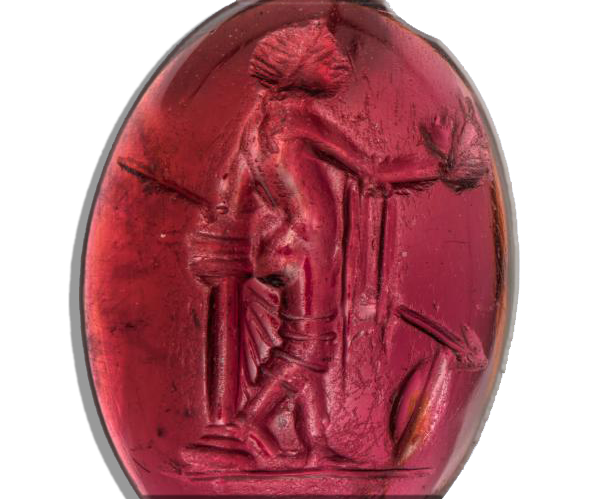 According to Emery University, “Making an Impression: The Art and Craft of Ancient Engraved Gemstones” is the first exhibition of ancient gems in the southeastern United States. Unfortunately, we did not hear about it until today, just 3 days away from its closing. The exhibition, produced by the museum’s curator of Greek and Roman art, Dr. Ruth Allen, draws from the museum’s collection of Greek and Roman engraved gems, many of which have never been displayed publicly.

The exhibition explores the material, iconography, and function of engraved gemstones in classical antiquity.

Engraved gems in the Greek and Roman worlds were used as signets, amulets, and personal ornaments. They were worn as statements of status, wealth, and sophistication, while also as amulets, and for better health.

As described in the exhibition, engraved gems, whether used as sealstone, amulet, or personal ornament, they provide a window into life in the classical world, from cross-Mediterranean trade and the expansion of empire, to administrative practice, to the expression of gender, status and wealth and the pursuit of luxury, to encounters with the divine, and ideas about magic and medicine.

You can tour the exhibition here!

All images by Bruce M. White, courtesy of Emory University.

A mythical half man, half goat, satyrs were followers of Dionysus, whose presence on gems often signaled the liberating pleasures of luxury.

The mythological god/goddess Hermaphroditos signifies sexuality. We will leave any further importance of its meaning to the Greek and Roman historians.

Tap here to link to the Michael C. Carlos Museum

… and to the Museum collection here too!

Gary Roskin - November 14, 2022 0
GIA's flagship publication Gems & Gemology - Fall 2022 IN THIS ISSUEMethods and Challenges of Establishing the Geographic Origin of DiamondsSapphire Beneath the Rich Black...

The Evolution Of Engagement Rings Is Steeped In History