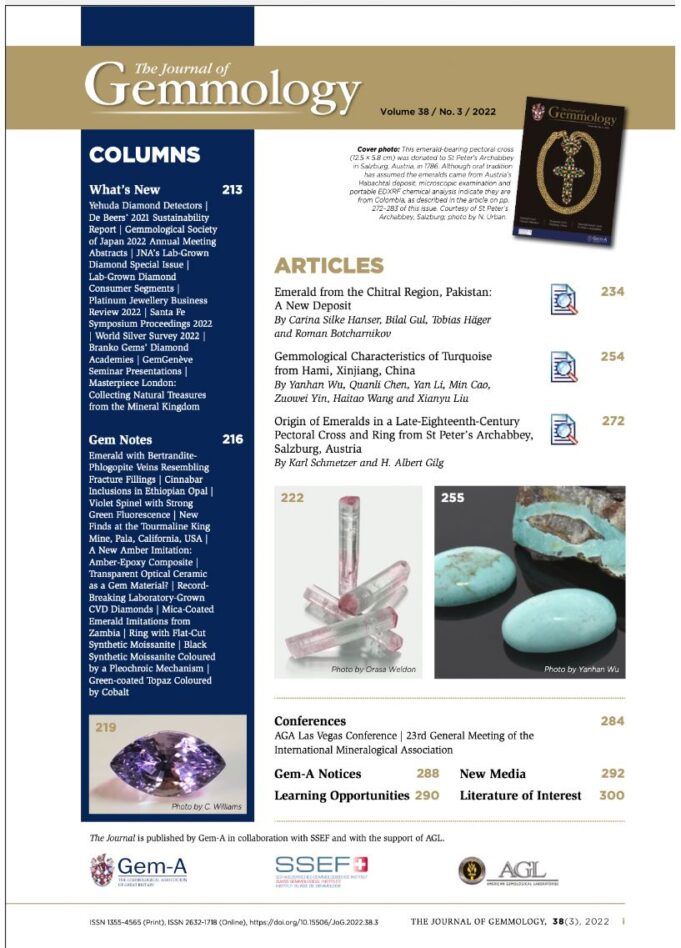 The latest issue of the Journal is out. Lab grown diamonds are up front along with meetings and symposium proceedings. Features include Turquoise from China, an 18th century jewel encrusted in emerald, and …

“Emeralds from a new deposit in the Chitral District of Pakistan were investigated with polarised UV-Vis-NIR, FTIR and Raman spectroscopy, and their chemical compositions were studied using EPMA and LA-ICP-MS analyses. The results are compared to data from the literature for classical emerald deposits such as those in Colombia and Zambia, as well as the nearby Panjshir region of Afghanistan and others.

It was found that the macroscopic appearance and habit of the Chitral specimens are similar to those from Khaltaro (Pakistan), and their spectroscopic characteristics resemble those of schist-hosted deposits (e.g. Zambia). The chemical analyses show high Cs and Li contents (consistent with a pegmatite-related origin), which are greater than the ranges of these elements reported in the literature for emeralds from most other important localities. In 2021, the Chitral deposit produced approximately 130 kg of loose emerald, and greater amounts are expected to be mined in the 2022 season.”

the Journal of Gemmology, Gem-A’s premier publication, is now available to all members.

Gary Roskin - October 26, 2022 0
The NicheJeph Ajobaju, Copy Chief Editor, October 20, 2022 Some $3 billion worth gemstones are exported from Nigeria every year but the treasury gets little...